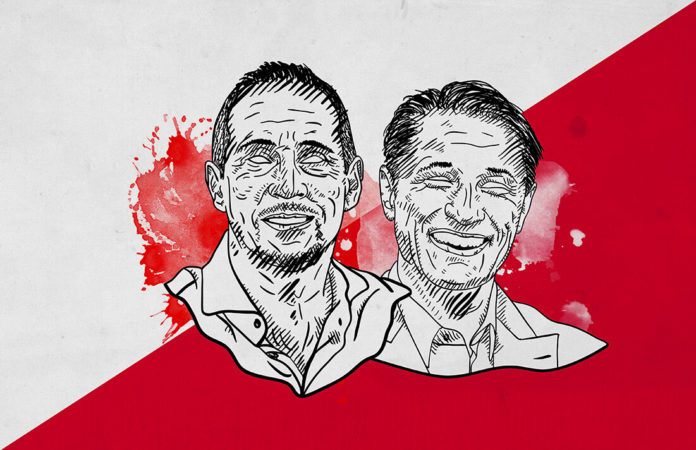 In the last match before entering the winter break, Niko Kovac faced his former club Eintracht Frankfurt. In the German Super Cup duel at the beginning of this season, Frankfurt suffered a big defeat. However, since their last clash, many things changed.

After a successful start, the German champion Bayern struggled to maintain their form and lost the first place to their rival Borussia Dortmund. Nevertheless, they improved their results in the last matches.

In this analysis, I am going to concentrate on Bayern’s weaknesses in possession and why the result didn’t tell us the whole story of this match.

The approach of both teams was predictable. Frankfurt’s attacking phases were characterized by verticality, no matter where they won the ball. Especially target man Sebastien Haller and both wing-backs had an important role. In many cases, the Frenchman was the target for long balls out of his team’s back-line. His task was to control these balls, lay them off for supporting midfielders and the wing-backs attacked with aggressive runs down the flanks. The central midfielders then tried to find one of the wing-backs or Luka Jovic with passes into space.

Bayern tried to build up more patiently and progress into the opponent’s third with short passes mostly. However, they struggled progressing constantly into the opponent’s half in a well-structured way. The root of this problem was the space occupation of their midfield-three.

Especially in the first half, Bayern’s space occupation was terrible on many occasions. In my opinion, the biggest problem was their midfielders’ positioning. Often all of them came deep in order to help their teammates in build-up phases. However, this attracted too many opponents to press and constricted the space in their own third (P1).

It was even worse to see many players almost positioned in a line which is highly disadvantageous for the progress of the ball into more advanced areas. In P2, you can see all of Bayern’s midfielders coming deep and being positioned in a vertical line. This makes it easier for the opponent to defend. Furthermore, distant teammates don’t have enough quantity of support teammates instantly when they receive the ball. This leads to isolation of these players.

This kind of positioning was also apparent in more advanced areas of the pitch. The next example (P3.1 & P3.2) shows four players positioned in a line. Jovic’s cover shadow takes out three players and Thiago switches to David Alaba. There, Frankfurt can create numerical superiority easily. The left full back has to play back to the centre-back which interrupts the forward play.

Rafinha’s isolation was often the consequence of the defective space occupation. The positioning structure caused difficulties for the switch of play to the other side. On many occasions, Bayern overloaded the left side of the pitch excessively. As Frankfurt blocked advanced options in this part of the pitch, Bayern had to switch to the other side. When Rafinha got the ball, there weren’t enough players near him in advanced positions so they couldn’t create a proper structure in order to continue the circulation of the ball towards the opponent’s third.

The consequence was that he had to play back to a centre-back who often passed back to Manuel Neuer. Frankfurt pressed these passes with high intensity which forced the German keeper to play long balls.

Thomas Müller is well-known for his spacious movements. He often left the right wing to support his teammates who preferred attacking down the left wing and halfspace. Even though these movements can be advantageous under certain circumstances, they had a negative effect as nobody provided width on the right wing. Frankfurt could focus on defending less width and concentrate on the centre.

Right full back Rafinha could have been a possible player to provide width in such situations. Though, the risk of not having him in a deeper position when Frankfurt transition was probably too high for Kovac.

If someone would attack the right wing/halfspace in P5, it would possibly draw out one player of Frankfurt’s back-line wider which would provide more space in the centre. If that’s not the case, it would pin Kostic deeper. This would increase the pressure on Frankfurt’s side more constantly as they would have fewer players positioned in an advanced position when they transition to attack.

Despite the weaknesses in occupying space effectively, Bayern possesses high individual quality. In the end, this quality was decisive for the result of this match. As Frankfurt failed to take one of their chances in the first half, Bayern were more efficient and managed to find the back of the net three times.

Even if the result suggests a comfortable win for Bayern, they showed weaknesses in possession in the course of the game. It will be exciting to see if Kovac can eliminate, or at least reduce these weaknesses, until the Champions League clash against Jürgen Klopp’s Liverpool.

If you love tactical analysis, then you’ll love the digital magazines from totalfootballanalysis.com – a guaranteed 100+ pages of pure tactical analysis covering topics from the Premier League, Serie A, La Liga, Bundesliga and many, many more. Get your copy of the FIRST of two December issues for just £4.99 here or preorder the SECOND of the December issues with an annual membership right here.

Laffor: I keep my feet on the ground