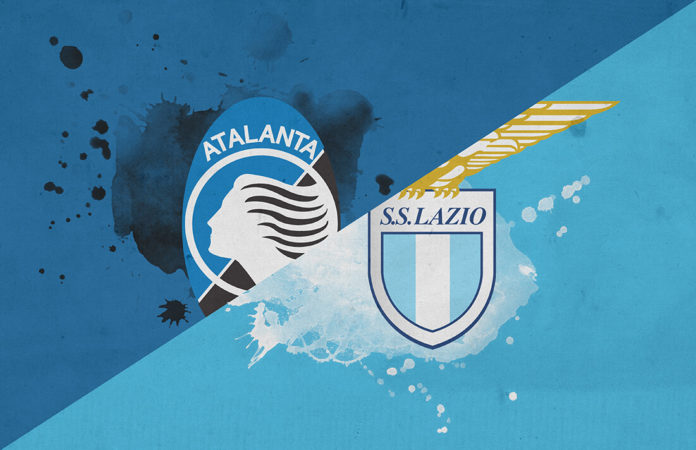 Atalanta have overcome a tough start to the season and now look back to their intense best. The 1-0 win against Lazio sent them into sixth, just two points off Serie A’s fourth Champions League place. In this tactical analysis I’ll look at the key tactical trends from their clash with Lazio.

Gian Piero Gasperini fielded a 3-4-1-2 as usual with the devastating front-three of Ilicic, Gomez and Zapata. Simone Inzaghi used a 3-5-1-1 as he always does where the interesting inclusion was Joaquin Correa just behind Ciro Immobile.

The graphic is courtesy of sofascore.com

Atalanta defended as they always do, in a very man-orientated manner. This means virtually every Lazio player is marked/could be marked at all times. Atalanta’s pressing is very aggressive and tough to withstand. This was the case against Lazio too.

We can see the aggressive nature of this style of defending in the image below. Central midfielder Remo Freuler (yellow) steps out to press Lazio’s right-sided centre-back, Wallace, while Gomez marks Badeln in the middle. In the centre circle, we can also see De Roon marking Milinkovic-Savic. As a chain reaction to Freuler’s movement, left-sided centre-back Gianluca Mancini (white) steps onto Parolo, the Lazio player free after Freuler moved towards Wallace. So that’s one of the central defenders defending just twenty meters from the opponent’s defenders. 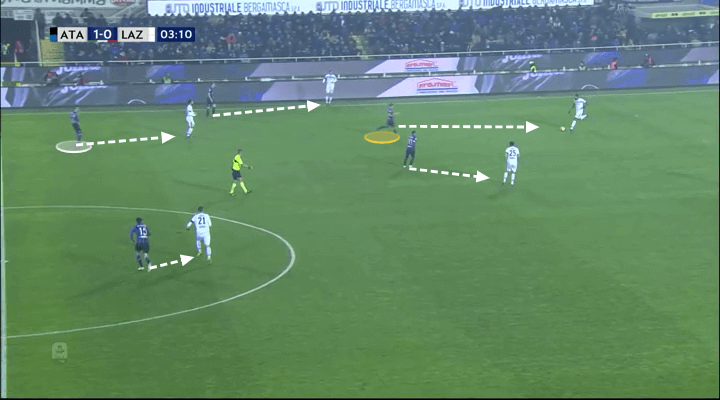 Below is another example of Atalanta’s collective man-marking. Here, Gomez presses Wallace while the other two forwards, the midfielders and the left wing-back Gosens pick up a man each. 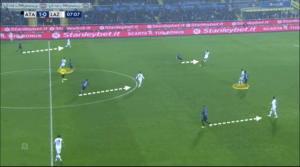 The below image highlights how sometimes the players stray away from their position when defending. Normally the players pass opponents on when they move away into a new space. But on the occasion highlighted below we can see the right-sided centre-back Toloi (yellow) follow Lazio’s Joaquin Correa over towards the left half of the pitch and even as high as around Lazio’s defenders as this played on. 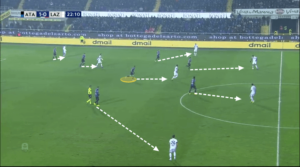 Finally, I picked out an overall image of Atalanta’s collective man-marking. The below image shows each Atalanta player marking or having access to press a direct opponent. 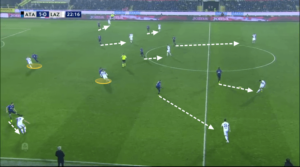 This style of defending is reactive since Atalanta always react to the movement of the opponent, but it becomes proactive since they’re so difficult to play against. They press aggressively and Lazio found it hard to cope at times. Still, Lazio did better than most teams against this press.

Inzaghi had clearly prepared his players for ways to exploit Atalanta’s heavily man-orientated approach. We’ll look at some of these now. The below image highlights the start of a sequence in which Lazio carved Atalanta apart. It starts with Wallace’s pass to the dropping Immobile. As you can see, a large space has opened up in midfield as Atalanta’s players are marking their opponents. Freuler is again the one pressing Wallace which means left-sided centre-back Mancini is charging out of defence to mark Parolo on Lazio’s right. 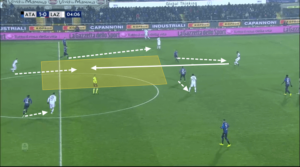 Below we can see how Immobile’s movement dragged central centre-back Palomino with the Italian which opened up a huge space behind Mancini and Palomino with both now near the halfway line. Immobile lays the ball off to Parolo. Milinkovic-Savic makes a run in-behind the two Atalanta center-backs. 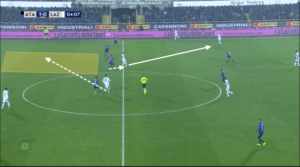 The final part of the sequence is the image below when Parolo plays the ball into depth for Milinkovic-Savic to chase. Nothing came of this move but it showed how clever movement and passing can overcome a man-orientated defence. 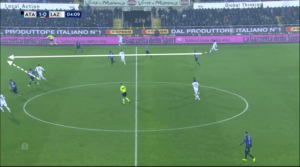 Another area Lazio must have identified was the number ten space between the lines of defence and midfield. Below we see how Correa can pick up the ball there with plenty of time. This is because of De Roon and Freuler (both yellow) marking Milinkovic-Savic and Parolo respectively. I’ve highlighted Palomino (red) as he would normally be the one with the job of stepping out of defence to pick up Correa. 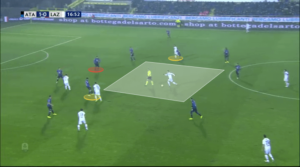 Below is another example with Immobile this time finding huge amounts of space. This is largely thanks to the Atalanta defence being occupied by the deep runs from Milinkovic-Savic and Correa. Lazio, however, didn’t manage to make the most out of these opportunities to hurt Atalanta. 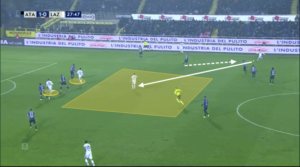 Atalanta were a lot more organized in a certain shape when it comes to the way they attack. They mainly adhered to a 3-4-1-2 shape with Papu Gomez acting as the number ten behind Ilicic and Zapata. Of those two Ilicic often dropped slightly deeper into the right-sided half-space. In this way, he became like a second attacking midfielder alongside Gomez. We can see their attacking shape below. Three centre-backs, two wing-backs, two central midfielders and three attackers. 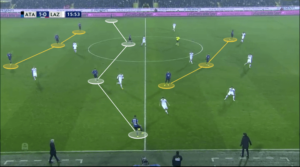 Atalanta are very fluid in attack and we often see either of the two midfielders make runs beyond the front-three and into the box. This is where the playmaking of Gomez and Ilicic become key as they can drop deeper in a rotation which sees the midfielders bomb forward. The wing-backs came forward down either wing consistently which helped stretch Lazio horizontally.

Gasperini had clearly identified a possible qualitative superiority with Zapata matched up against Wallace. The Colombian forward would often make runs towards the left-flank where he isolated the Brazilian centre-back and dominated him 1v1. Atalanta’s goal came from such a situation. One example of this tactic can be seen below. Gosens has attracted the attention of Lazio’s right wing-back Marusic which has opened the wing up for Atalanta to attack into. Gosens plays the ball down the line into the path of Zapata who moves wide. He then isolates Wallace in a 1vs1-situation and beats him. 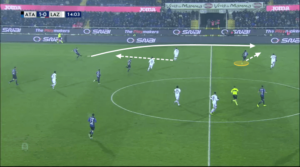 Atalanta’s revival after a slow start has been impressive and they now push for European football for the third season running. Given the bad form of Lazio, now five games without a win, and the inconsistency of Roma, Milan and Inter you wouldn’t bet against them nicking a great position at either of those clubs expense yet again.

If you love tactical analysis, then you’ll love the digital magazines from totalfootballanalysis.com – a guaranteed 100+ pages of pure tactical analysis covering topics from the Premier League, Serie A, La Liga, Bundesliga and many, many more. Get your copy of the FIRST of two December issues for just £4.99 here or preorder the SECOND of the December issues with an annual membership right here.

Who is going to win the tactical battle, Emery or Sarri?